DMZ Tour Hue is a full-day trip to visit historical relics left over from Vietnam War. Demilitarised Zone (DMZ) Vietnam served as a war-free buffer between the communist North and the free South Vietnam in the time between 1954 – 1975. Located in Central Vietnam, Quang Tri Province, at the 17th parallel, this place was one of the bloodiest battles during Vietnam War in the 60s, 70s desprite its name.

Our DMZ Deluxe Tour from Hue takes tourists step back in time and witness the scene of many destroyed foundations of former American military bases buildings, monuments dedicated to local war heroes, and hundreds of war relics displayed within a US combat base-turned-museum.

07h00: Our guide and car will pick you up at your hotel in Hue central, then transfer to Vietnam Demilitarized Zone in Quang Tri province. Ready to start the DMZ Tour Hue.

Horror Highway: May 1, 1972, will never be forgotten by people in Quang Tri and Thua Thien provinces not because it is International Labor Day, but because of the horrible carnage on Vietnam Highway 1, the Horror Highway. Thousands of civilians, mostly the elders, women, children, and scores of soldiers were killed by artillery and infantry weapons in hours of shooting. 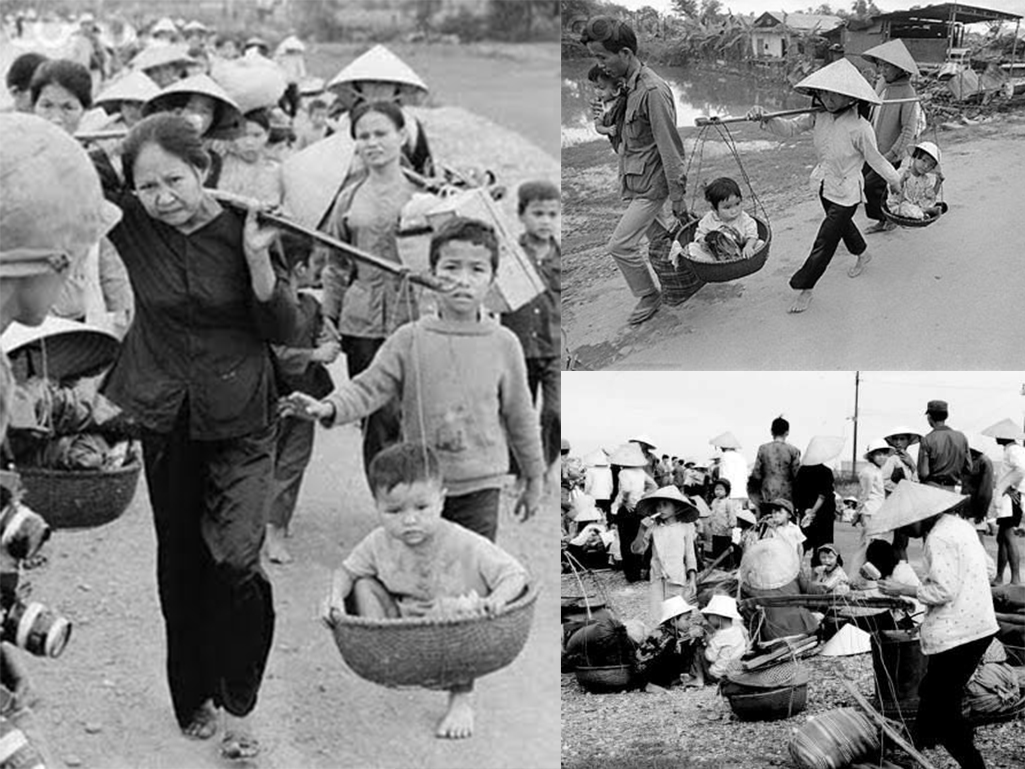 Long Hung Church: one of the very few existing buildings remains in Quang Tri town during “Fire Summer” or Eastern Offensive in 1972. It is a National Relic in the town of Quang Tri Vietnam – BA5453. 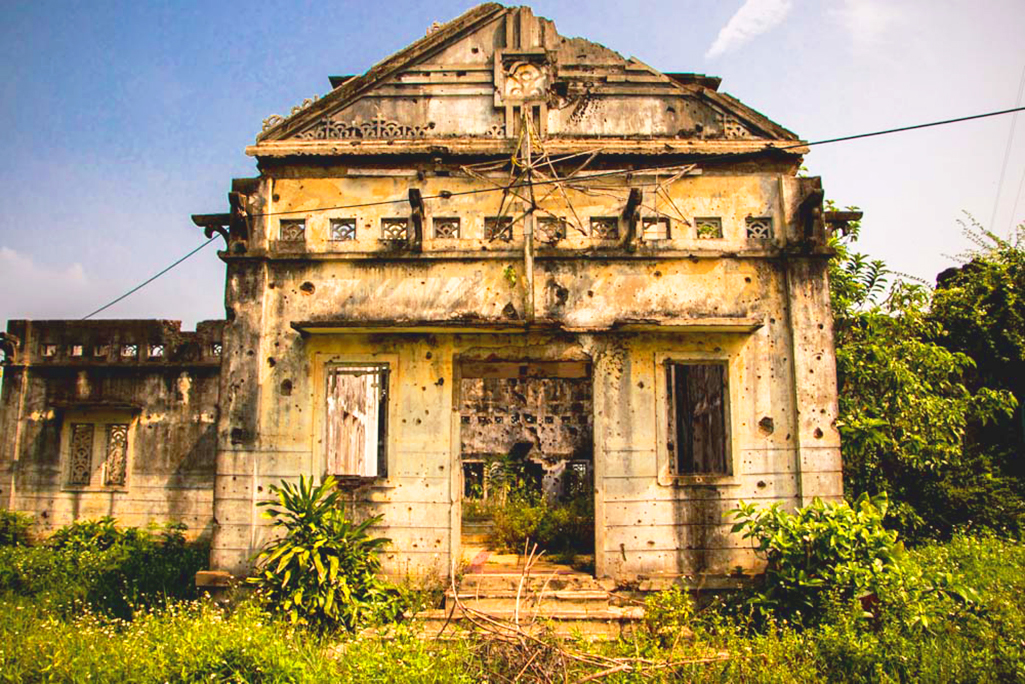 Quang Tri Ancient Citadel: is seen as an eye-witness of fierce battles during the anti-American resistance war in 1972. During the 81-day fighting, the citadel was almost destroyed by thousands of tons of bombs released by the US army. Nowadays, the citadel becomes a place to mark immortal victories of the Vietnamese army and people and to educate youths about the nation’s revolutionary tradition and its patriotism.

Dakrong Bridge: the bridge was considered the beginning of the Ho Chi Minh Trail network, and during many years of Vietnam War, this access point was hotly contested. The Dakrong Bridge fell many times. Now it’s a grand suspension bridge, a proud thumbed nose as if to say, “You can’t knock down my bridge anymore.” 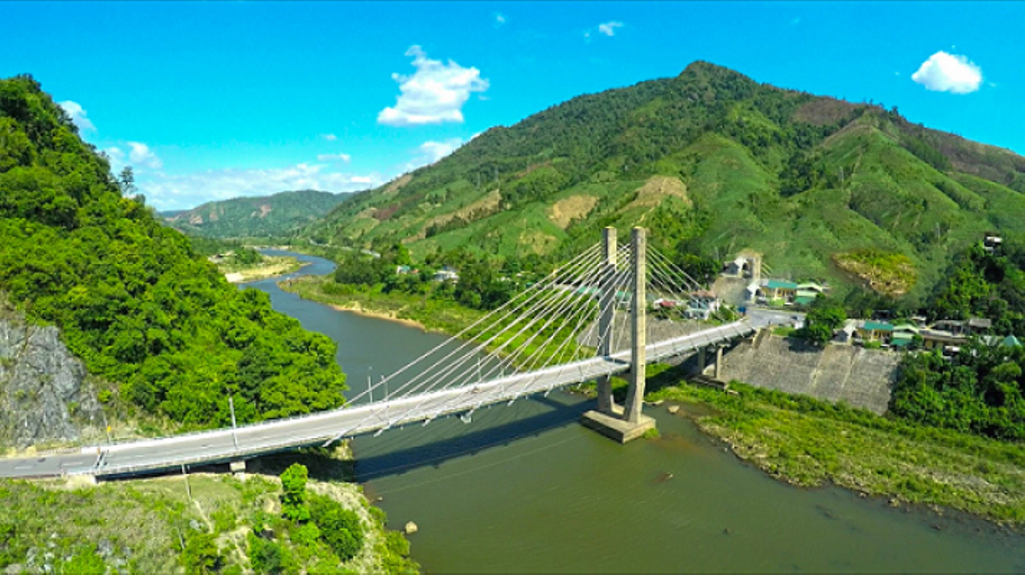 On the way, tourists also have chances to meet Paco minority village.

Ta Con Airport: now the Khe Sanh Combat Base Museum, contains a boneyard of several captured U.S. tanks and aircraft destroyed during the Battle of Khe Sanh. According to the official accounts provided by the museum, 197 U.S. planes were shot down or captured during the 170-day battle. 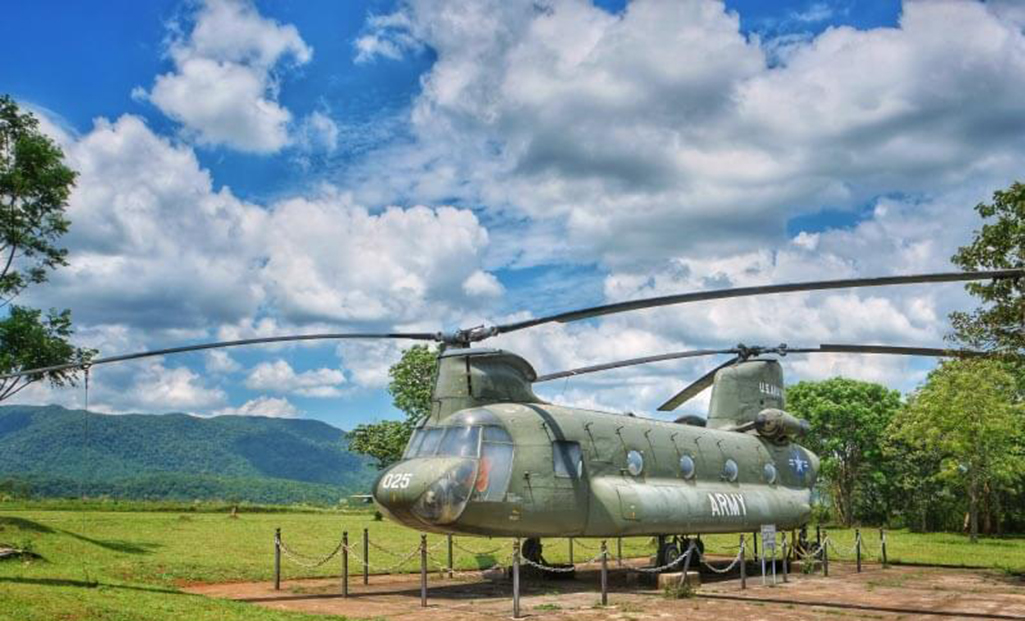 Hien Luong Bridge – Ben Hai River: The Geneva Agreements on Vietnam signed in 1954 divided Vietnam into North and South with the 17th Parallel where the Ben Hai River runs through the central province of Quang Tri as a borderline. Hien Luong Bridge, also knows as the Peace Bridge, was built by the French in 1950, across Ben Hai River. It is 178 m long but it took 21 years for Vietnamese people from the North and the South to be united. 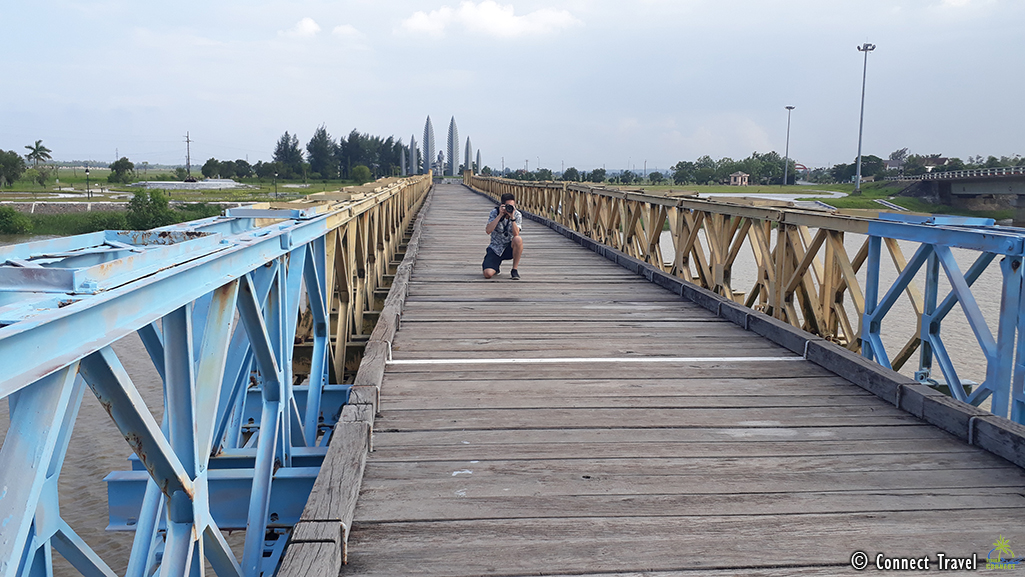 Doc Mieu Base: One part of an elaborate electronic system (McNamara’s wall) intended to prevent infiltration across the DMZ. There’s basically nothing left of this old American base save a rusting tank and a sign. Apparently this once formed the backbone of the “eagle eyes of America” electronic monitoring fence. 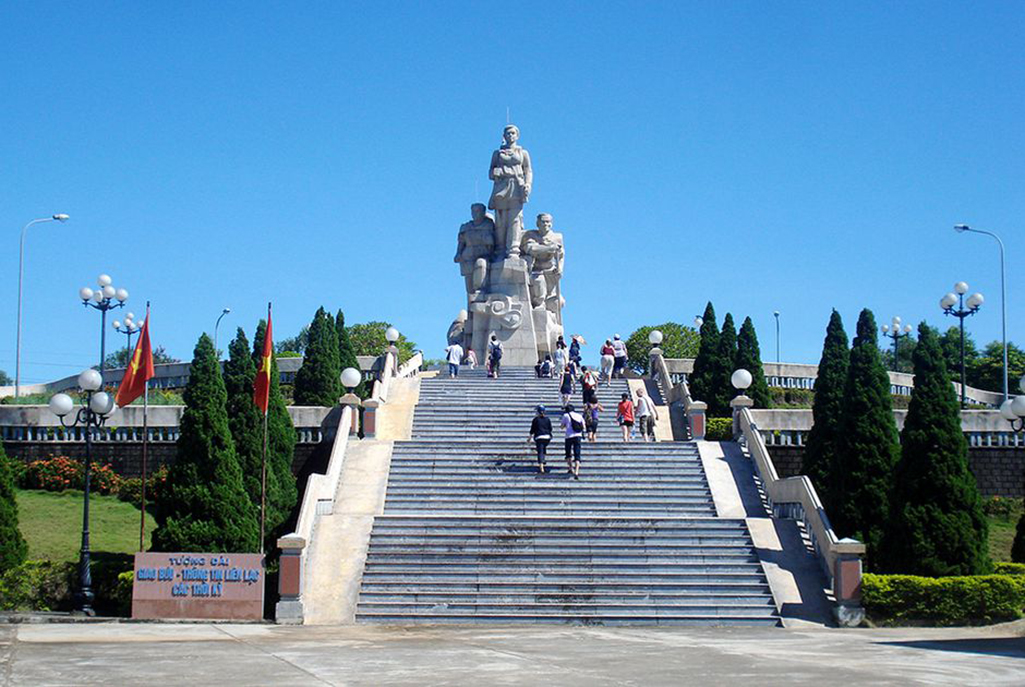 Vinh Moc Tunnels and Tunnels Museum: The most highlight part of DMZ Tour during Vietnam War. The complex of Vinh Moc tunnel located deep in the Vietnamese Demilitarized Zone and sheltered Vinh Linh county people from the intense bombing. The tunnels were a success in saving the villagers’ lives and providing them the necessary living conditions to fight back the American enemy. 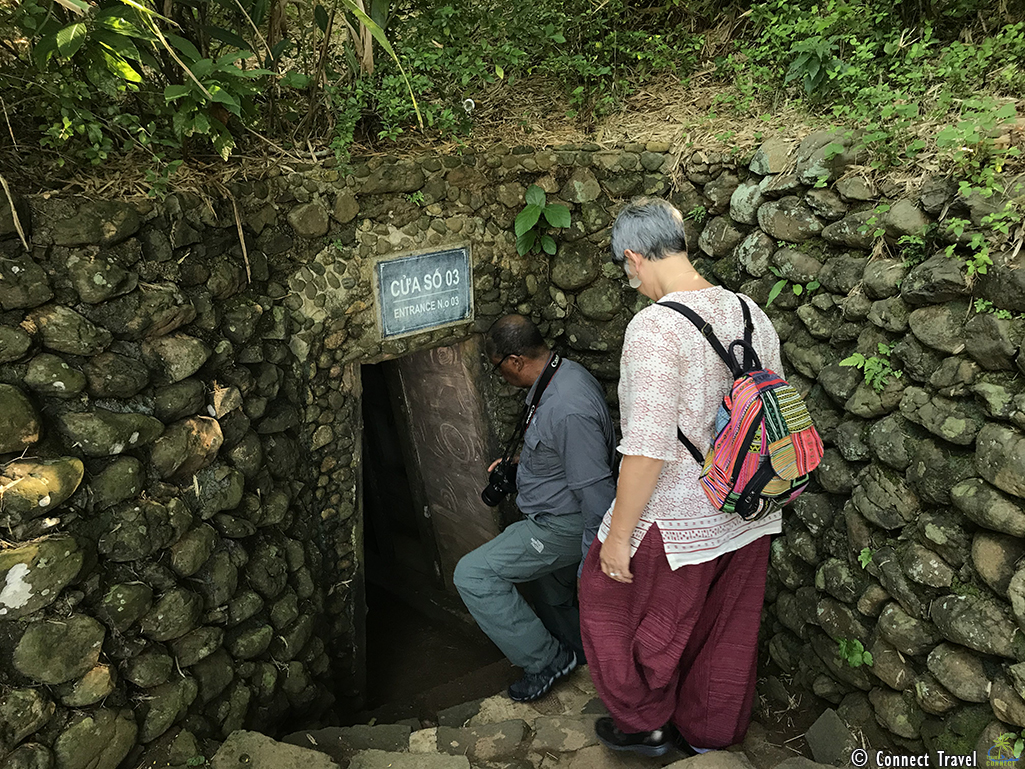 Tour guides have the right to rearrange the schedule under specific circumstances and still reserve the amount of visiting points, as well as the tour quality.

“Quality is our top priority”

klyeoh
Amazing insight into Hue atreet food culture This Cyclo tour was an amazing experience for us. Being a hardcore foodie who seeks out authentic local eats, we expected some good recs by our food guide, Nguyen Ngoc An, from Connect Travel - and he certainly lived up to his promise. We indulged in an amazing array of local street eats, ranging from tapas-like finger foods to delectable noodles. Can't believe we covered so much in one evening. Going around Hue by cyclo was perfect - one can traverse the narrow alleys where there dining gems are hidden. Yet one moves at a more leisurely pace, enabling one to soak in the atmosphere. Thanks to Connect Travel for an amazing food experience.

DiPi
Good service, nice tour We booked a tour to the DMZ here. Service was very quick and the tour was nice. We tried to book another tour, but couldn't because everything closed because of Corona, but the people at the infocentre were really friendly and helpfull

Paul M
Excellent tour! This was the best tour we had in Vietnam! The guide LOC was very knowledgeable, helpful and caring! Since he is a veteran and from the area he does not only explain all the military details but also the vietnamese traditions as well as local people and there farming methods. But most importantly, this is NOT a touristy tour and LOC does NOT rush you. Quite the contrary, he encourages you to discover each site in every detail. Recommend a 100%

dunklesweiss
Excellent trip Quoc our guide was very kind and interesting. He had loads of info I’d never have got if I did this trip on my own. The extra knowledge was worth the money. We covered a lot of ground. Again, worth it is I’m not sure I could’ve done so much on my own in one day. Would definitely recommend. It was an emotional day but Quoc used a lovely gentle humour when appropriate to lighten the emotional load. Thank you for an unforgettable day. Cheers.

Becky
Excellent tour! Brilliant tour, just a small group of 5 of us, our guide An was amazing, very informative and great at keeping the mood light on an emotional day. We also had an ex military guy in the group that added a lot of information on the weapons and artillery. Bonus! I studied modern history and was interested in seeing this war from a Vietnamese point of view, this tour was great in that respect. Definitely need a guide to visit these places to explain the history. Plenty of time in each place, although I could of spent all day discovering each and every tunnel, unbelievable place until your there living it. Highly recommend this tour!

Josephine Verhaegen
Great tour! This tour is super informative and very thorough! Our guide An was super friendly and knowledgeable, we had a great day exploring all the different sites and learning more about the Vietnam war! I highly recommend this tour!

Sivan B
DMZ tour For people who want to see and understand the Vietnam war, this is your tour ! We were a small group (4 people), we went to all the iconic place where the war was, the DMZ,... I really enjoy it and I learn a lot! Thanks to An, our guide who was really good, funny and who love his job !

vanveenendijkstra
Very interesting and pleasant day tour We were lucky to have a car for only both of us and we had a very pleasant trip. The guide told about yhe amazing histrory of the war in Quang Tri and on the Ho Che Minh Trial places like Khe San. And after lunch we visited the previous DMZ border and Vin Moc tunnels. The guide was telling the stories in an interactive way. So he checked what we knew allready and what we picked up from his explanations. We are specially interested in the histrory and we also told him about the Dutch experience with Indonesia. After Japanese capitulation in 1945 Sukarno proc;laimed the independence of Indonesia like Ho Chi Minh did in Vietnam. It was a very pleasant day and we have a positive remembering on this day. Pieter & Didi

logo369
Memories Although it was a long trip, it was worthwhile. I served in Nam but not on the D M Z. I heard my brothers talk about certain locations and I had the experience to see you them and travel the Ho Chi Minh trail for the second time.
Tripadvisor rating score: 5.0 of 5, based on 28 reviews.
4.8 / 5 ( 6 bình chọn ) 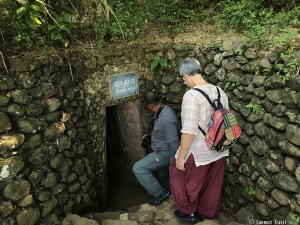 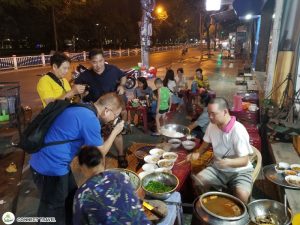